The National Highway Traffic Safety Administration (“NHTSA”) is reviewing new rules that could require trucks (both newly manufactured and, possibly, older models) to adopt a range of new crash prevention technologies. Commercial trucks, like big rigs, compose a tiny fraction of the total U.S. traffic, around 4 percent, however, accidents with commercial trucks result in a disproportionate number of fatalities. NHTSA and over federal agencies are reviewing whether crash prevention technologies can address the dangers and reduce the number of fatalities.

The proposed changes were submitted in February of 2015, by the Truck Safety Coalition, Advocates for Highway and Auto Safety, the Center for Auto Safety, and Road Safe America. Moreover, the European Union already requires front crash prevention technologies on all new commercial vehicles.

Trucks and passenger vehicles tend to interact primarily on highways and freeways. The higher speeds present during these conditions also magnify any resulting accidents. Essentially, the greater mass of the trucks and high speeds of the accidents are a deadly combination for passenger vehicles.

NHTSA is reviewing new rules that would require all newly manufactured commercial trucks (with a gross weight rating of 10,000 pounds or more) come equipped with front crash prevention systems. The proposed changes would provide trucks with automated avoidance and warning systems.

The regulations do not specify the type of crash prevention system. Currently, there are several variations. Each of the variations uses a combination of radar, cameras, and other sensors to monitor the path of the truck. An algorithm then reviews the data and alerts the driver of potential hazards or objects in the truck’s path.

Some crash avoidance systems rely on the driver to react to the warnings. However, other technologies can override the brake or steering systems, enabling the computer to avoid the danger without operator input.

The Insurance Institute for Highway Safety (IIHS) estimates that forward collision avoidance systems could reduce up to 37 percent of commercial truck front-to-rear collisions, assuming all trucks were equipped with the technology.

Furthermore, researchers from the University of Michigan Transportation Research Institute calculate that if the systems utilized automatic brake or steering, fatalities could be reduced by 47 percent.

However, these studies are mere projections. No front crash prevention system has been adopted on a sufficiently large scale by the trucking industry to facilitate real world study.

Real World Application of the Technology

Comparable systems in passenger vehicles have resulted in significant reductions in rear-end collisions.

In fact, a study conducted by IIHS found that front crash prevention systems with automatic braking reduced rear-end collisions by 40 percent. Furthermore, prevention systems (without automatic braking) reduced accidents by 23 percent. IIHS estimates that if front crash systems were adopted by all newly manufactured passenger vehicles, it would prevent 700,000 collisions a year which represents about 13 percent of all accidents.

These preventions technologies were so successful that NHTSA, the IIHS, and car manufacturers agreed to voluntary timelines to adopt these technologies as a standard feature in all new passenger vehicles. Based on analogous findings with passenger cars, it is likely that commercial vehicles would undergo a similar reduction in accidents and fatalities.

Adoption of the Technology

So far, trucking companies with large fleets appear to be adopting some of the avoidance technologies, including blind spot alerts and side view assists. However, these technologies are expensive to install, and commercial trucks have an average operational life of 10 years, therefore, the upfront cost is enormous. Moreover, there are no government programs to defray the costs.

As of this writing, NHTSA is continuing to review the efficacy of industry-wide adoption rules. If NHTSA follows the same pattern it did with passenger vehicles, it is likely that new built commercial trucks will come equipped with these technologies.

Whatever the conclusions of NHTSA debates, some safety measures will reduce the danger of driving alongside a commercial truck.

Most safety experts recommend passenger vehicles give commercial trucks a wide berth while on the highway to ensure that the truck driver can observe the passenger vehicle. Furthermore, trucks tend to kick up rocks and debris which could impact windows and cause an accident.

Moreover, most commercial trucks are instructed to remain in the slower lanes. Passenger vehicles are advised to avoid these lanes when possible. 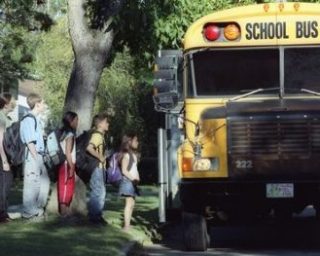 When the Wheels on the Bus Don’t go Round

When buses crash, the drivers and companies they work for can be held liable for... 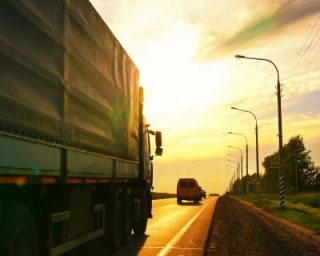 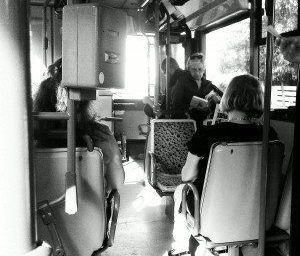 Passenger buses, just like other large vehicles, are a tremendous danger to any pedestrian, motorcyclist,...