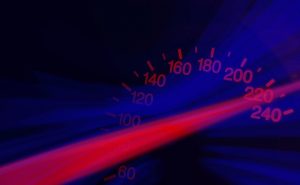 A red line points to 220 mph at a car speedometer

Excessive speed is a contributing factor in a considerable number of fatal motor vehicle accidents. Speed related accidents are entirely preventable and motorists who travel at excessive speeds negligently put others at risk of injury or death. When motorists speed and cause fatalities, they can be held liable for the consequences their actions create.

Pedestrian Risk of Death by Speed

The GHSA has determined that more effort is needed to reduce the risk of death for pedestrians. In particular, large, urban areas should actively take steps to reduce speed on city streets, improve sidewalks, and enhance bike paths. Other measures include aggressive law enforcement efforts and improving the engineering that goes into the design of roundabouts and streets. These efforts help ease traffic congestion, reduce speeds, and create safe travel paths for pedestrians and bicyclists.

Technology as a Tool for Life

The GHSA has also recommended the implementation of new safety standards and regulations. These include using speed limiters, automation, and AI to reduce speeds on city streets. These technologies would also alert motorists to the presence of pedestrians. Adoption and installation of these technologies, many of which are still in development, would have a negligible impact on the cost of new vehicles, but would have a significant impact in reducing the costs associated with fatal motor vehicle accidents. Combined with enhanced enforcement of speed limits, these technologies could have a significant impact on the overall number of fatal motor vehicle accidents involving pedestrians in Nevada and throughout the country.