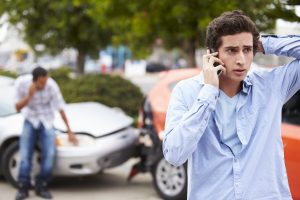 In March 2014, the Las Vegas Metro Police Department put a freeze on responses to non-injury auto accidents throughout the city. People involved in these accidents were left on their own to gather accident information without an official police report. Many accident victims sought advice from an auto accident attorney Las Vegas who understood the confusing details of this police freeze.

Although the decision to cease responses to minor accidents in 2014 wasn’t motivated by politics, according to the Deputy Chief of Las Vegas Metro, the decision caused a huge public outcry among Las Vegas residents. Most people were confused about the decision and demanded police help and support in the case of an auto accident, but the freeze was upheld.

After a two year hiatus, Las Vegas Metro Police have recently agreed to resume non-injury accident responses. For drivers, this is good news. They will now be able to call the police and get a detailed police report at the scene of an auto accident, whether it involves personal injuries or not.

The recently resumed coverage of minor automobile accidents occurred after a 0.05 county sales tax increase. The rise in the “More Cops” tax will generate a projected $14.6 million annually in additional revenue for the police department.

To Report or Not to Report

Although Las Vegas’s Metro police will resume responses to non-injury auto accidents, the decision of whether or not to call them in the case of an auto accident rests entirely on the shoulders of the drivers involved. Legally, in a non-injury accident between two motorists, both drivers can agree to exchange information and leave it at that. Since Nevada is a shared-fault state, this decision presents several problems:

For motorists who choose to report a non-injury accident in Las Vegas and Clark County areas, they can call 311 or  911 for serious injuries. Nevada state law requires motorists to file an SR-1 accident report within 10 days for damages over $750. An auto accident attorney Las Vegas can provide important legal advice for personal injuries.