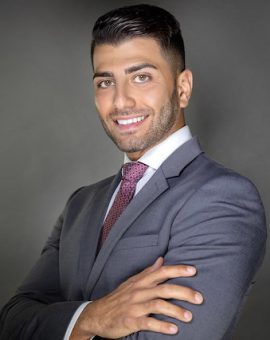 He is a Las Vegas native, and graduated from the University of Nevada, Las Vegas with a bachelor’s degree in Business Management. After graduation, Joseph moved to San Diego, California, and attended California Western School of Law.

While attending California Western, Joseph was a member of the Business Law Society, where he cultivated important legal relationships. During his law school career, Joseph interned for a reputable personal injury firm in downtown San Diego. During his internship, he had the opportunity to work on complex cases including the chemical burn cases involving the 2019 San Diego Supercross.

Joseph would return to Las Vegas for the summer where he worked as a law clerk at another plaintiff’s personal injury firm in Nevada. While interning during the summers, he realized his passion for helping those who have been wrongfully injured.

Joseph also served as a judicial extern for Justice Abbi Silver of the Nevada Supreme Court, where he learned and worked in Nevada’s court systems. During this time, he gained the valuable perspective of a highly regarded justice.

After graduating law school, Joseph moved back to Las Vegas to take the Nevada bar exam.
Joseph is fluent in Arabic, and he enjoys being a member of the Las Vegas community. In his spare time, he enjoys traveling the world with family and friends. He is proud to be part of a hardworking and dedicated team of attorneys who go above and beyond to give clients the representation they deserve.